An imposing man given the title of sea-king, typically bestowed upon powerful chieftains who lead raids. Rognvald claims to be virtually untouchable as a warrior.

Items that are unique to each hero. Weapons and armor are introduced through the story and upgraded linearly through Sidri and Brokk in the tavern. After crafting various individual armor pieces, each hero has 1-2 final armor sets with immunity to certain effects. 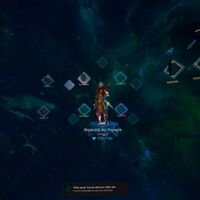