Risi, the half-giant, is a hero in Asgard's Wrath.

Risi comes from the race of giants, or jotnar, who hail from Jotunheim. They were banished to their realm by the Aesir, who rose up against their giant forefathers and seized power.

Items that are unique to each hero. Weapons and armor are introduced through the story and upgraded linearly through Sidri and Brokk in the tavern. After crafting various individual armor pieces, each hero has 1-2 final armor sets with immunity to certain effects. 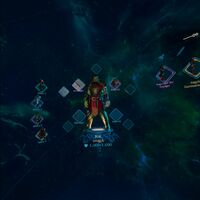