There are five mortal heroes players can control in Asgard's Wrath.

"Birthed in an explosion of ice and fire, you found yourself on the Bifrost, where a radiant portal beckoned you. You arrived at a sea of destruction..."

The player can also explore the worlds in their god form, which allows the player to find or manipulate things that a hero could not. 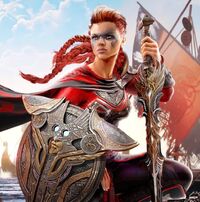 When players die, there is a chance that other players may discover them as "fallen heroes" appearing as purple apparitions at the location of their defeat. Players can then accept a challenge to avenge the fallen heroes. Yggdrasil seeds, used at The World Tree, are awarded upon successfully completing these challenges.